Corals are animals, classified under the phylum Cnidaria, a name that stems from the Greek word “knidē” meaning "nettle.” A feature that distinguishes cnidarians, which includes jellyfish and sea anemones, is the presence of stinging cells called “nematocysts.”

Corals are made up of individual units called polyps, which have simple, soft bodies that are externally radially symmetrical (meaning that they exhibit symmetry around a central axis). Coral tentacles, filled with nematocysts, surround a single opening of the coral polyp that both ingests food and discards waste. 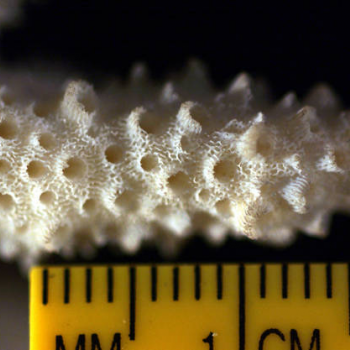 Corals have calcium carbonate skeletons that the coral polyps secrete. When the coral is alive and healthy, it looks colorful instead of white.

The color of many corals comes from proteins in the corals themselves, others come from the colors of symbiotic algae. The algae, or zooxanthellae, live in coral polyps, have a golden green appearance, and convert energy from sunlight into food for their coral host to grow and survive. Fluorescent proteins (or FPs) in corals can appear red, yellow, green, and blue, and are thought to help coral animals cope with temperature stress, as an ultraviolet shield. In fact, scientists have observed that different color corals of the same species have different thermal tolerance.

In honor of International Year of the Reef, Pantone selected “Living Coral” as 2019’s Color of the Year. Living corals come in many colors, not just pink. For instance, this species, Stylophora pistillata can be pink, blue, or green. It seems like this particular colony was green, based on Dr. James Dana’s 19th century illustration.

The study of coral reefs is a unique intersection of biology and geology because corals are living animals that build geological structures. Coral polyps use calcium and carbonate ions from seawater to generate a hard skeleton and build the reef - earning them the name “ecosystem engineers.”

These skeletons hold a lot of history. The lines and textures you see in a coral’s cross section are similar to tree rings. Scientists use coral cores to measure growth rates and understand historical temperature and chemical data - similar to the way researchers use ice cores to measure changes in climate. 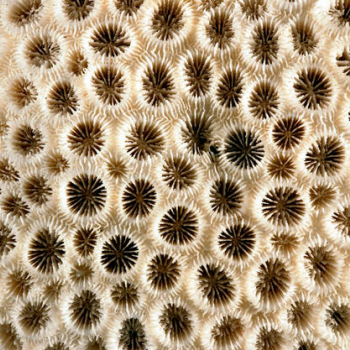 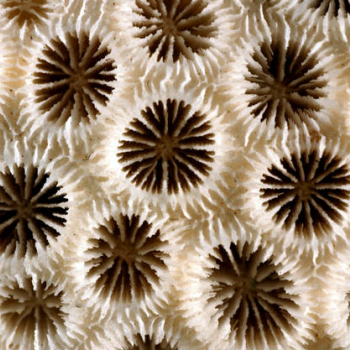 Corals can reproduce sexually and asexually. When asexually reproducing, a polyp will duplicate or clone itself, thus growing the coral colony and the reef. 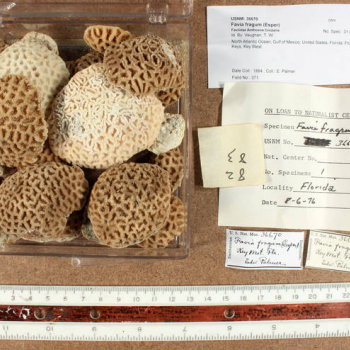 Some genera (plural of genus) are made up of only one species. This is called monotypic. The  genus Diploastrea is monotypic because heliopora is its only species.

Broadcast spawning corals like this one expel gametes (egg and sperm) into the water during mass spawning events. A meter x meter table coral can produce and release 1 million eggs. When gametes from genetically distinct colonies meet at the surface of the water, fertilized eggs develop into free-swimming planula larvae, that will settle back down on the seafloor to grow a new coral colony. 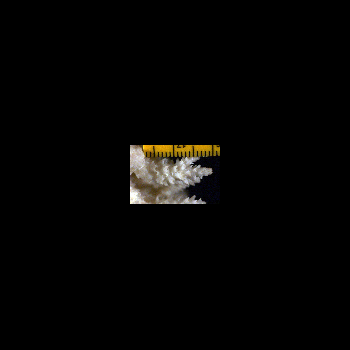 The eggs of broadcast spawning corals like this one, are positively buoyant and will float to the sea surface on release. When an egg is fertilized by sperm from a different colony, it will develop into a new planula larva over several days. During this planktonic development life stage, these young corals can be carried by ocean currents  to settle and grow on distant reefs. 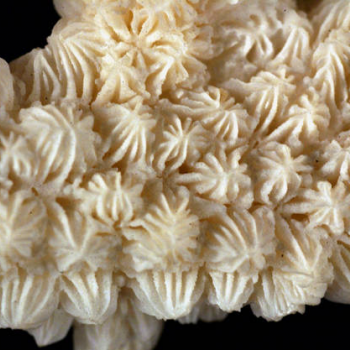 This brooding coral will internally fertilize and release fully-developed planula larvae throughout the year, in sync with lunar cycles. These larvae are ready to settle on the seafloor right away, so local retention can be high for species that brood. This is a useful reproductive mode, especially in marginal conditions and at the edge of the species’ range.

This particular coral is unusual for having a bright red skeleton made up of many tubes which house individual coral polyps. 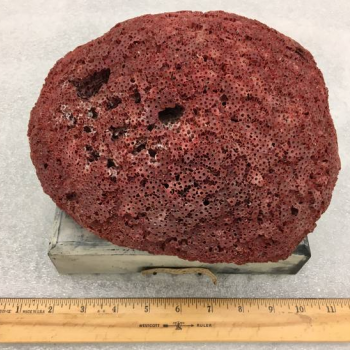 ‹ Corals up Classifying Corals ›
Back to Top